Since 2003, the IEM has been generating and archiving nationwide mosaics of NEXRAD base reflectivity every 5 minutes. These mosaics are generated by combining the 130+ individual RADARs that comprise the NEXRAD network. This page provides background information on this dataset and highlights various ways this dataset can be and is used. Please note: Errors can and do occur during the automated generation of these images, please use them with care.

Important changes to this product. 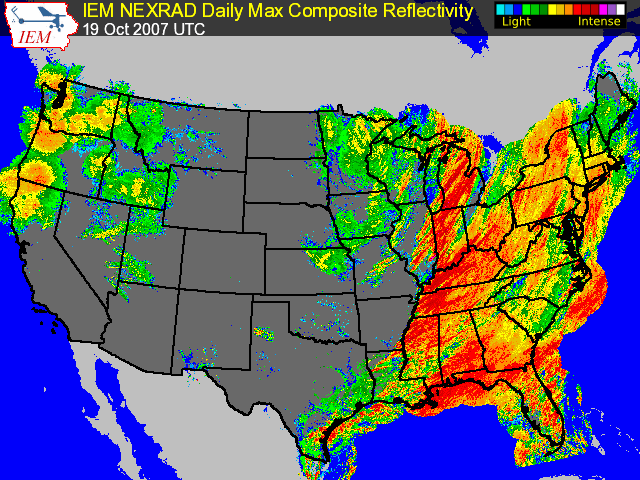 Composite of mosaics for 18 Oct 2007. Click image for regular size.

The IEM receives a feed of NEXRAD Level III products from the Unidata Internet Data Distribution. This feed includes the Base Reflectivity (N0R) and Net Echo Top (NET) products which are saved to disk for later processing. Every 5 minutes, a script runs a GEMPAK program called nex2img. nex2img searches the on-disk data for current (within 15 minutes of runtime) products and then mosaics them into a large image.

The result of the nex2img process is a simple raster image with size of 6000 pixels in width by 2600 pixels in height. This raster image is then compared with a similiar raster of NET to remove any suspected false echos. In the wintertime, this comparison is skipped for most of the country. The final result is a PNG formatted image looking much like the example image shown above.

The final image is shipped to the IEM webfarm for archival and use. You can always find the 10 most recently generated rasters here (n0r_0* is the newest). You can also find current and historical images in the archive. The format for the URL is:
https://mesonet.agron.iastate.edu/archive/data/YYYY/mm/dd/GIS/uscomp/
For example, here are the images generated for today: https://mesonet.agron.iastate.edu/archive/data/2020/09/20/GIS/uscomp/
All dates in the archive are in UTC time.

The images are stored in PNG format. They have a 4-bit colormap and are non-interlaced. Images for the past 50 minutes are also available in TIFF, GeoTIFF, and gzipped GeoTIFF format. Most people want to use these images in a GIS, so world files (.wld or .tfw) are available in the same current and archive folders. The projection of these images is in EPSG:4326 (WGS84 longlat).

For some people, the PNG format is not readable by their GIS, so the IEM provides a server-side conversion of the PNG files for delivery of a GeoTIFF. This application is called like so:
https://mesonet.agron.iastate.edu/request/gis/n0r2gtiff.php?dstr=200711010025
where dstr specifies the {year}{month}{day}{hour}{minute} in UTC of the requested raster. Rasters are only available at minutes modulo 5.

The raster image has a colormap associated with it. The raw pixel values increase monotonically from -30 dbz to 75 dbz every 5 dbz. All values below 0 dbz are assigned black (rgb 0 0 0). We have tried to match the commonly used NEXRAD display as what you see on National Weather Service page. Please note: We do not include a concept of missing data or "no-data". So spots with beem blockage in the mountains or out away from the CONUS are just "black".

A special way you can interface with this data archive is via the Web Map Service that also supports time based retrieval (WMS-T). Point your WMS-T aware app at:
https://mesonet.agron.iastate.edu/cgi-bin/wms/nexrad/n0r-t.cgi?
The nexrad-n0r-wmst layer is time aware!

Here is an example interface utilizing the WMS-T NEXRAD service. The interface code is a part of the OpenLayers toolkit. The default time display shows Hurricane Katrina making landfall.