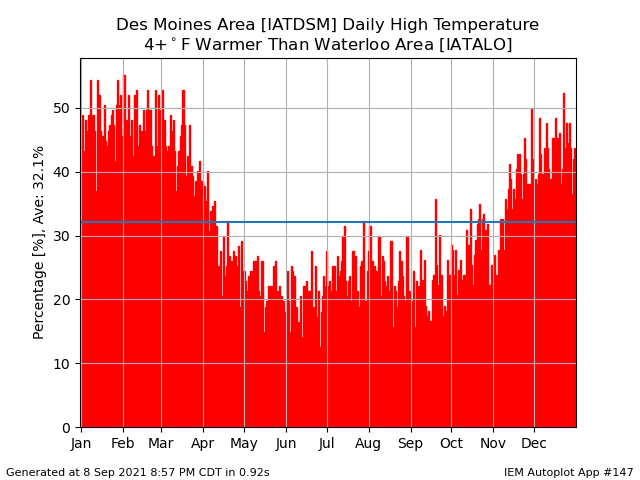 Generate This Chart on Website
The high temperature for Des Moines on Wednesday was 81 while the high for Waterloo was 77 making for a four degree difference. The featured chart presents the daily frequency of the Des Moines site being four degrees warmer than Waterloo for high temperature. A clear annual cycle is shown with the higher frequencies happening during the winter months. Waterloo typically has more snow cover than Des Moines, so that is part of the explanation for the higher frequencies during the winter months. During the warm season, the air masses are more homogeneous with temperature so horizontal gradients are decreased which explains some of the annual signal. Additionally, Waterloo has a sandier soil and some micro-climate effects along with being north and east of Des Moines, which places Waterloo in a cooler climatology. And finally, the Des Moines Airport has one of the strongest urban heat island effects in Iowa which help buoy temperatures there as well.