This page lists out the IEM Daily Features for a month at a time. Features have been posted on most days since February 2002. List all feature titles. 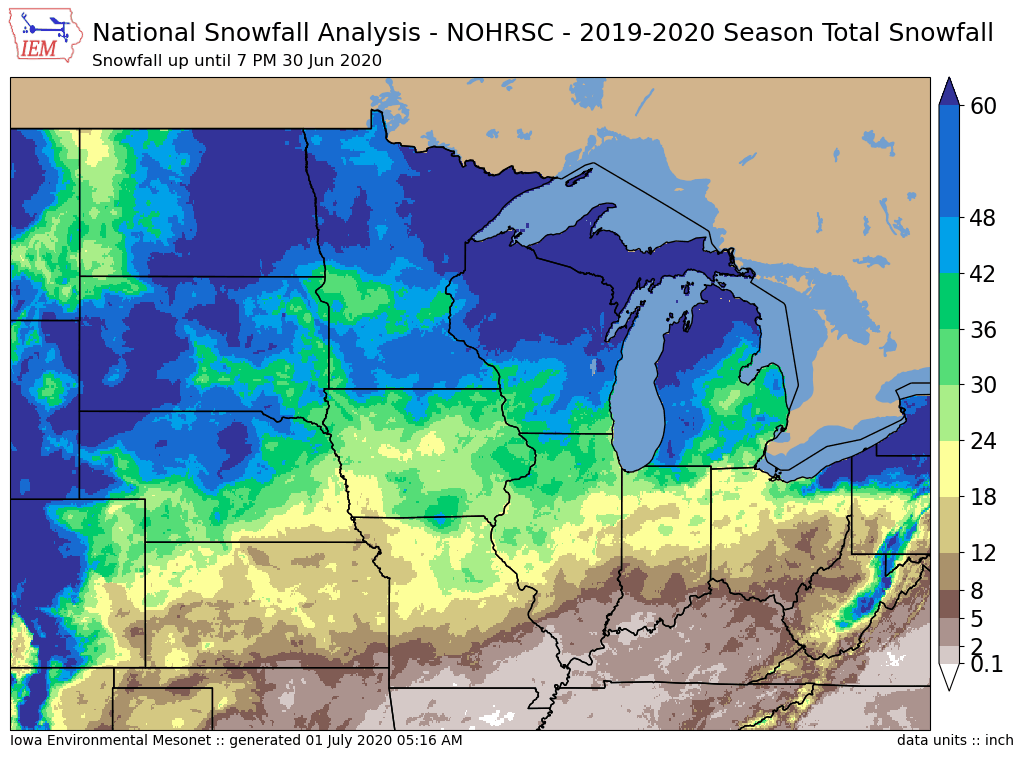 '19-'20 Season Snowfall Total
01 Jul 2020 05:25 AM
With the summer time heat and humidity settled in for July, perhaps a cool thing would be to plot up the previous winter season's snowfall total thanks to an analysis provided by the National Operational Hydrologic Remote Sensing Center (NOHRSC). For most of the state, season snowfall totals were not all that impressive. Only after a major snow producing storm in April did the totals over southern Iowa start to approach or exceed season average. For me, the strong seasonality that Iowa experiences with hot summers and cold winters makes it fun to live here. For some others, I suspect they'd like either the cold or the warmth to stick around all year!
Voting: Good - 14 Bad - 0 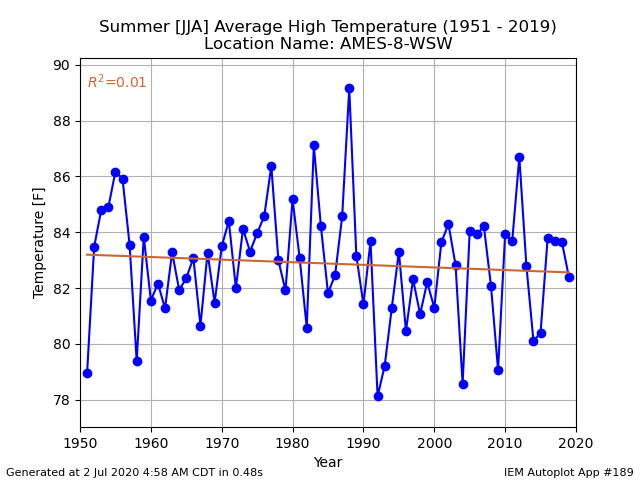 Summer Average Highs
02 Jul 2020 05:04 AM
With our recent weather featuring steamy conditions and the forecast for July continuing to look very warm as well, it is informative to look back on past average daily high temperatures during summer for Ames as shown by the featured chart. A simple linear trend line is fit to the plot and while it shows a poor fit score, the trend is somewhat negative. It is interesting to notice that recent very warm years (2012 and 1988) were both significant drought years for the state.
Voting: Good - 8 Bad - 0 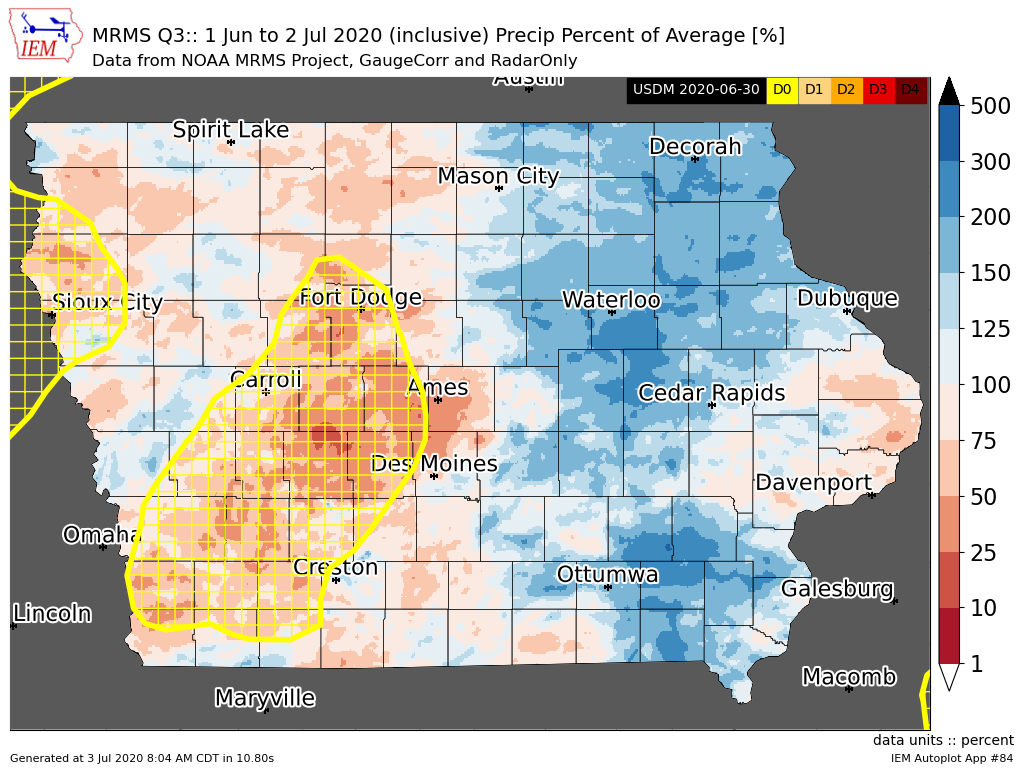 Wet and Dry Areas
03 Jul 2020 08:12 AM
The just released US Drought Monitor continues to paint a dry picture over western Iowa with a considerable portion of that area analyzed in "D0" drought status. The featured map presents the combination of the current drought monitor and the past 30+ days precipitation departure. The Drought Monitor blends a number of short and long term indicators along with reported impacts to produce the analysis, so there is no one-to-one relationship with the map shown. The drought situation continues to be of concern as warmer weather, developing crops with increased water demand, and continued lack of considerable rain in the forecast look to degrade the drought situation further over the coming weeks.
Voting: Good - 13 Bad - 0 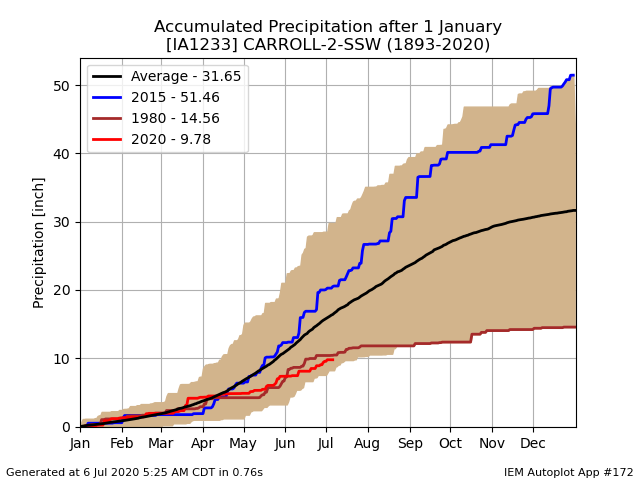 Carroll Precipitation
06 Jul 2020 05:33 AM
Precipitation continues to be elusive for parts of the state this summer. The driest area has been west central Iowa with the featured chart highlighting the year to date precipitation total for Carroll, Iowa. This year's accumulated total is plotted along with the yearly max, min and envelope of period of record data. The 2020 total is currently below the driest year of 1980 for the year to date period. About the only thing that is saving the driest areas of the state is the wet end to 2019 and mostly saturated soil moisture profile to start off the growing season. Conditions are expected to continue to deteriorate with hot and dry conditions prevailing for the near term future.
Voting: Good - 13 Bad - 0 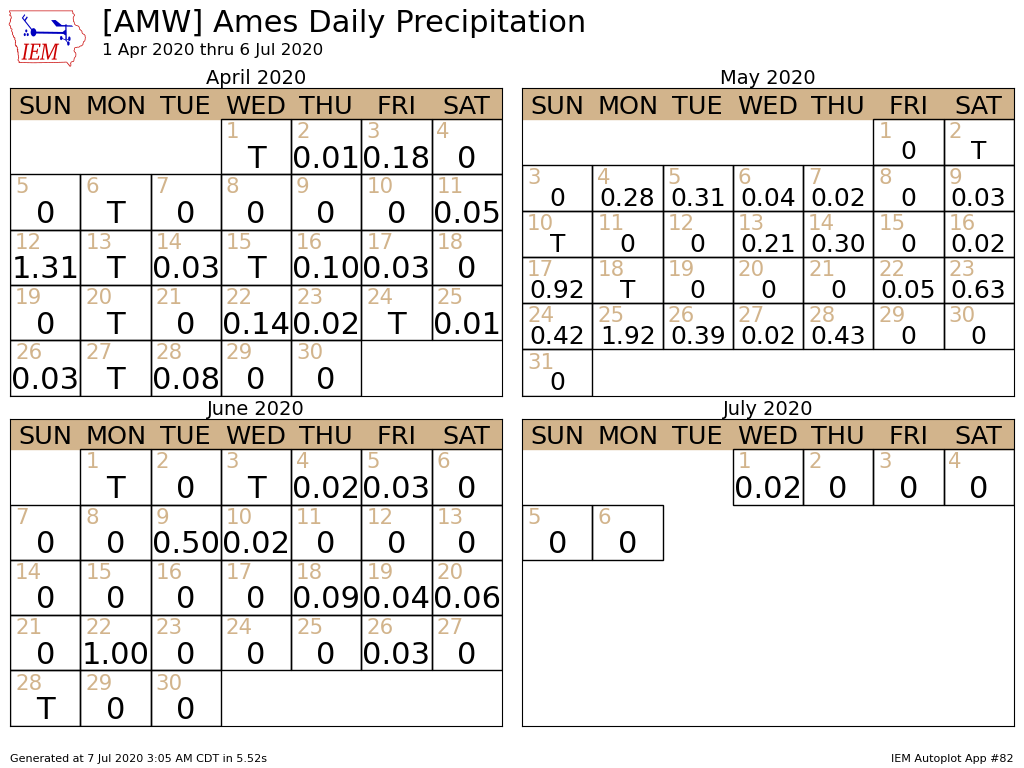 Not Much since 1 June
07 Jul 2020 03:12 AM
The featured calendar presents daily precipitation reports from the Ames Airport weather station since 1 April. Since the 1 June, there is only one rainfall of significance with an inch falling on 22 June and the rest of the days below a tenth of an inch. The forecast continues to look rather bleak with continued warm temperatures and limited chances of rainfall. The rain chances are non-zero at least and perhaps some dry areas in western Iowa can receive some rainfall this week.
Voting: Good - 10 Bad - 0 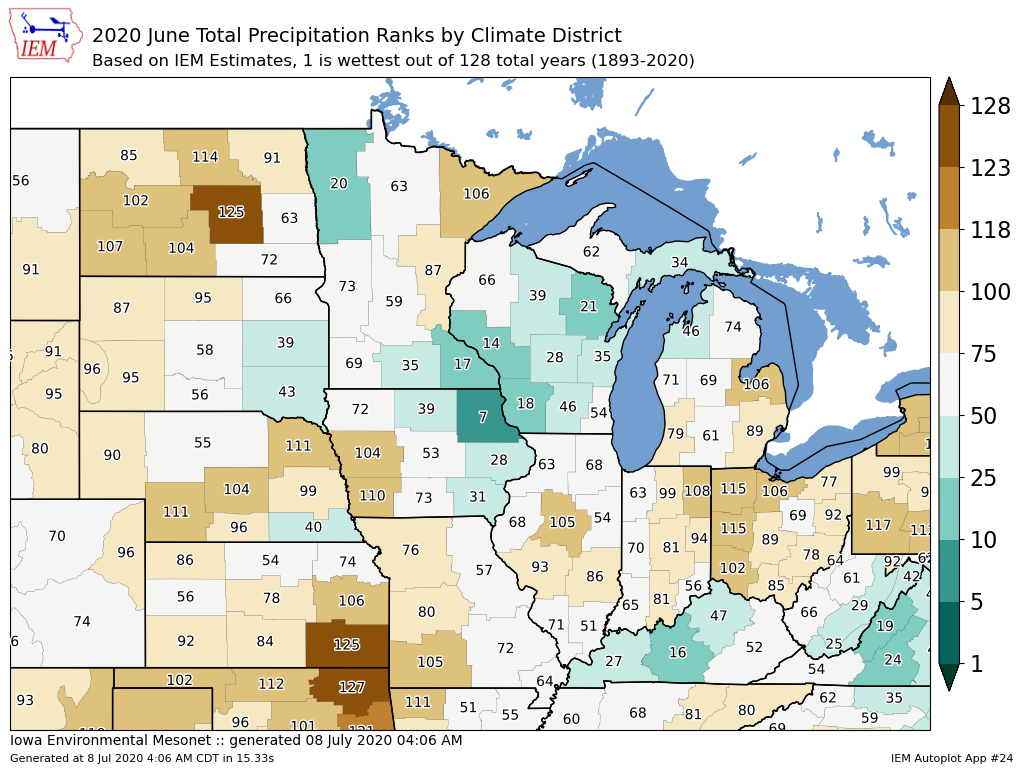 Tale of Two Junes
08 Jul 2020 04:12 AM
It is not too late to look back on the significant contrast in precipitation during June over Iowa. The featured map presents IEM / unofficial climate district averaged precipitation ranks for the month against all previous Junes back to 1893. Northeastern Iowa ended up with a top 10 wettest June while southwestern Iowa was top 30 driest. This pattern has persisted into July with much of the rain that fell yesterday being isolated to the northeastern corner of the state. While chances of rain are in the forecast, much of the driest portion of the state looks to mostly miss out on significant totals.
Voting: Good - 13 Bad - 0 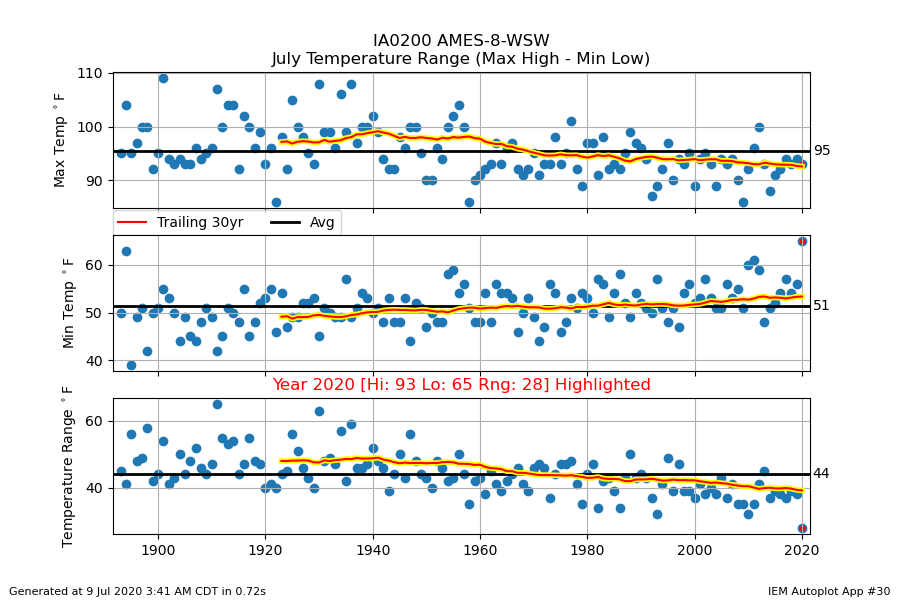 Tight July Range so Far
09 Jul 2020 03:54 AM
The featured chart presents the warmest high, coldest low, and the range between the two during July for Ames. The range so far this July has been very tight with the coolest low temperature only in the mid 60s. Each plot shows a simple long term average and trailing 30 year average. The trends follow other summer time metrics in the state with increasing summer low temperatures and decreasing high temperatures. The forecast this July continues the hot temperatures with perhaps some warmer highs than yesterday coming next week.
Voting: Good - 14 Bad - 0 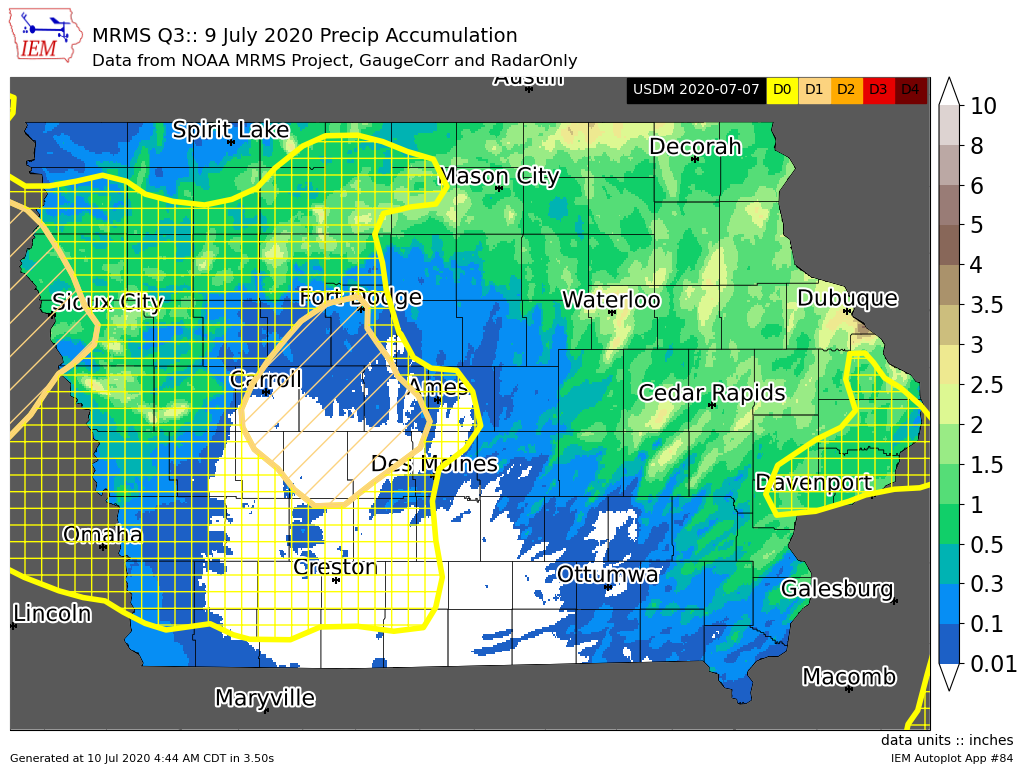 Missed the D1
10 Jul 2020 04:51 AM
The featured map displays the combination of estimated precipitation on Thursday along with the most recent US Drought Monitor issued on Thursday as well. Widespread significant rainfall finally fell over Iowa again, but conveniently missed the driest analyzed portion in the state found at level "D1" over west central Iowa. Sometimes these dry areas become self-fulfilling prophesies of having rainfall miss as the dryness implies that the surface is dry and thus near surface humidity is likely to be lower and thus less moisture/energy for storms to work with. For agricultural crops in this dry area, it is getting down to crunch time with a rapidly maturing crop due to recent heat and corn being at a critical stage requiring rainfall to produce high yields.
Voting: Good - 19 Bad - 0 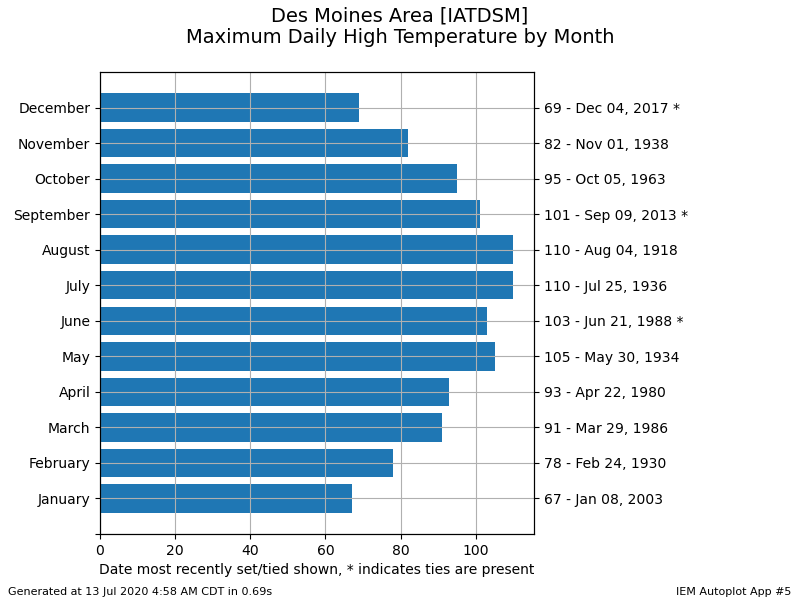 Monthly High Records
13 Jul 2020 05:03 AM
With a few locations in Texas setting their all time record high temperature for the month of July over the weekend, it is good to check in on our records as shown by the featured chart for Des Moines. Each month's most recent high temperature record is shown with ties denoted by an asterisk. 110 is the record for Des Moines with it occurring in both July and August. It is interesting to compare with January and how "cool" that 67 value feels whilst in the heat of summer time in Iowa.
Voting: Good - 10 Bad - 0 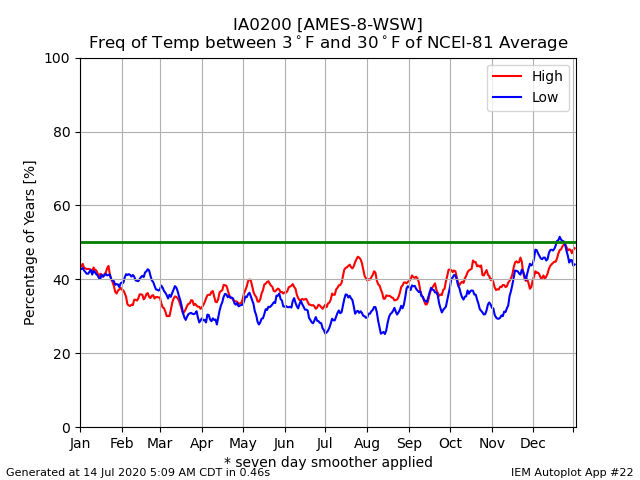 +3 Degrees and Warmer
14 Jul 2020 05:16 AM
The high temperature for Ames today is expected to be near 90 degrees, which is roughly 3 degrees warmer than the average high for the date. The featured chart presents the frequency of having a daily high or low temperature at least 3 degrees above climatological average for the date. For high temperature, mid to late July has some of the high frequencies shown. It is also interesting to note that this time of year also has some of the largest differences in frequency between high and low temperature.
Voting: Good - 11 Bad - 0